So many scenario’s came into play on Sunday with many drivers still in the “elite 8” and having a shot at Miami who needed a win to stay in. And this brought some of the best racing I’ve seen all season long. Early battles between Chase Elliott and Denny Hamlin showed just how much pressure there was on every driver still in contention.

The hard racing might have been Elliott’s kryptonite though as he would eventually crash due to a blown rear left tire on lap 165. This brings me back to an earlier “rub” between Elliott and Hamlin where Denny would make contact with the rear left quarter panel of Elliott to move him up the track coming out of the dogleg. There was no immediate sign of any damage, but given the fact that it was the rear left tire that blew for Chase just a handful of laps later, it definitely gives you something to think about. The blown tire would send Elliott into the wall between turns one and two and ending his day and Championship hopes.

On any other day, starting tenth and finishing third would be a solid run for any driver. But for Ryan Blaney, it was another failed attempt at a must-win to move on to Miami. Joey Logano had many opportunities to move on to the “Final Four” in Miami. He would actually lead 93 laps and win Stage 2. Even without a win, he would still have moved on if Kyle Busch would have won the race since he would have had more points than both Hamlin and Blaney. Logano would finish in ninth place after falling too far behind late in the race.

But it would be Denny Hamlin who would be the eventual winner of the Semi-Final race at ISM Raceway. He would lead a race-high 143 of the 312 laps on the day which included the majority of the final stage. It was clear from the beginning of the race that Denny and his team were on point as the #11 Toyota was clearly the fastest car on the track. Only 15 cars would finish all 312 laps, and that was largely due to a late caution.

When Denny was asked what went through his mind in the post-race media center, he said “shit.” This drew a laugh from the media, but it summed up how intense of a situation the final caution of the day brought up. So the #11 team had a huge decision to make in the pits. They ended up going with just a two-tire change while other drivers, including teammate Kyle Busch went with four fresh tires. Usually in this scenario, the four tires wins the race nine of 10 times. But Denny was able to hold off Kyle who jumped from fourth to second coming out of turn two. Hamlin would take home the victory and lock in his spot for next week!

But I don’t think Kyle, whether he could have passed Denny or not would have done so. That would have kicked his Joe Gibbs Racing teammate out of Miami and put rival Joey Logano in the championship race next weekend.

So the Championship Four, the Final Four, or whatever you want to call them, are set for Miami. Three former champions and one racer who could be one of the best to ever do it without ever winning a championship. Also coming out of ISM Raceway were Martin Truex Jr., and Kevin Harvick who finished sixth and fifth. Those two already advanced to Miami with earlier playoff wins.

Three Joe Gibbs Racing teammates versus one Stewart-Haas driver in Kevin Harvick, who is no stranger to winning, regardless of the odds. I don’t see any team strategy in Miami however as it is a winner-take-all race. Actually, you don’t even have to win the race to be crowned Champion. The driver who finishes best out of the Championship Four will be the season Champion.

Even with all the excitement at ISM Raceway on Sunday in front of a sold-out crowd, the build up actually started under the lights on Friday night as the trucks took to the track to kick off the weekend.

The #16 of Austin Hill would lead the field to the green flag…..and then never lead a lap as his hopes of a championship went out the window with a 13th place finish.

The #99 of Ben Rhodes was trying to spoil everyone’s fun with a win after leading at the end of stage one.

Brandon Jones in the #51 would lead stage two. Neither Rhodes nor Jones were in position to move on to the final race in Miami in championship contention.

In the end, it would be a championship contender coming to the front in the form of Stewart Friesen. He would lead 44 laps on the night including taking the checkered flag.

The Championship Four would be completed by the #45 of Ross Chastain, the #88 of Matt Crafton, and the defending champion, the #24 of Brett Moffitt.

The track had plenty of drama on Saturday afternoon as the Xfinity Series would hit the track at ISM Raceway. The favorites to move on to the Championship Four in Miami were the top four heading into the weekend. You had the ‘Big 3’ in Bell, Custer, and Reddick, and they were joined by the eventual race-winner in Justin Allgaier.

Christopher Bell would lead the most laps in the race with 92, but would run into trouble with a spin and a blown right-front tire. This ended his fight to get back to the front after a pit-road speeding penalty sent him to the back. He had made it all the way back to 8th place before the spin in the final stage. Bell would finish 16th, but would move on to Miami having already secured enough points to do so.

Allgaier would lead 85 laps and be the eventual winner, holding off a late charge by Cole Custer.

After the Xfinity Series drivers cleared the track and the excitement of the Allgaier victory wore off, the K&N Pro Series-West took to the track at ISM Raceway for the final time this season.

By just making the start, barely, Derek Kraus in the #16 Napa Auto Parts car would clinch the series championship. He would have to start the race in the back of the field due to a failed inspection. But even knowing this, the race still had plenty of excitement.

Sam Mayer, who started the race from the pole would lead the field for a race-high 63 laps before being overtaken by Ty Gibbs on lap 71.

Gibbs (#40) would battle stiff competition from Mayer and the rest of the field and be able to clinch his first victory, despite having to work through many overtime cautions.

But while Gibbs was celebrating in victory lane, Derek Kraus was doing a championship style burnout on the track for the fans! 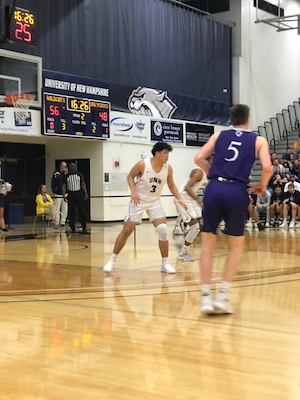