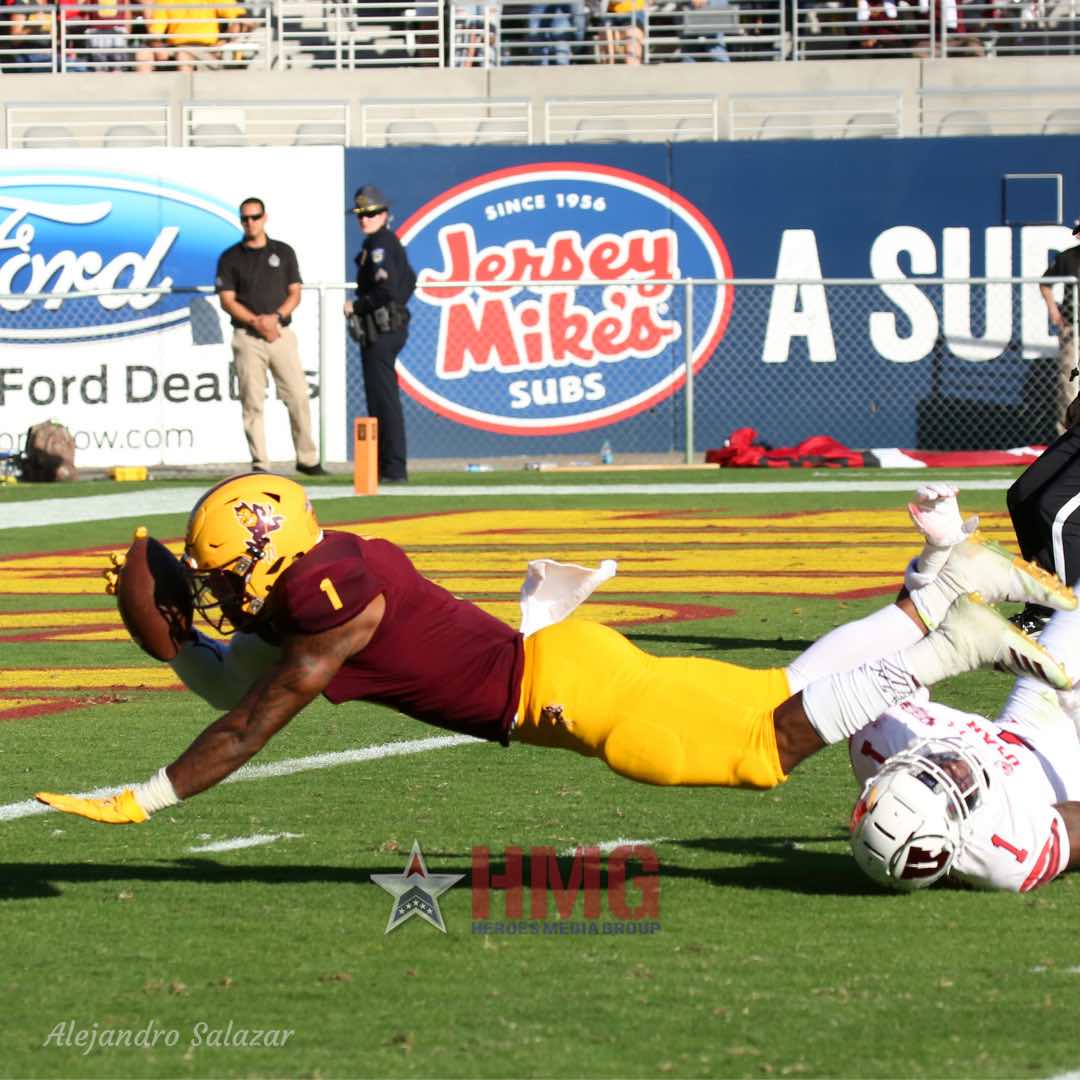 Arizona State received the ball on their own 25 yard line after the opening touchback.  The Sun Devils offense moved down the field with efficiency both through the air and the ground, highlighted by a 31 yard pass from Wilkins to Brandon Aiyuk down the left sideline.  The drive would come up short after an incomplete pass on 3rd and 15 on the Utah 15.  But Utah would be called for targeting on the play, and it would give the Sun Devil offense a first down and goal on their own 7 and 1/2 yard line.  Eno Benjamin would run the ball in for the score from the 6 yard line to give ASU the lead, 7-0, with 10:12 remaining in the 1st.

Utah would start their drive after a fair catch and begin their drive on their own 25.  Arizona State would come up big with an interception on the ASU 1 after a bobbled drop by the Utah receiver.  Crosswell would return the ball to the ASU 47.

The Sun Devil offense would take over from there and would drive down the field in 3:13 for a touchdown!  A 3-yard pass from Wilkins to N’Keal Harry on a play action slant to the left side of the end zone.  The reception move Harry into a tie for 3rd all-time at ASU in receptions, and 8th all-time for touchdowns in ASU history.

Utah’s offense would again receive the ball on their own 25 in an attempt to finally get the offense going.  They would use a good mix of short passes and read-option runs to move the ball down field.  The drive was capped off by a 1-yard touchdown run by Zack Moss.  With the point after good, Utah would cut the ASU lead in half to 14-7 with :40 remaining in the 1st.

Utah’s defense would stop the ASU offense on a 3 and out, forcing the punt.  A nice return by Covey would give the Utes the ball on the ASU 44 to start their drive.  After driving down to the ASU 23, Utah would be forced to kick a field goal.  The 40-yard FG by Matt Gay is good.  Score now ASU 14, Utah 10 with 12:22 remaining in the 2nd.

After the touchback, ASU would take the ball over on their own 25.  The Sun Devils would convert multiple third down plays on their way to almost adding a field goal of their own.  Brandon Ruiz would hook the 37-yard field goal to the left.  Utah would take over on the 20 with 6:58 remaining in the 2nd.

Utah would respond with an 80-yard drive, capped off by a pass from Huntley to Nacua for the touchdown.  Utah takes the lead over Arizona State, 17-14 with 2:15 remaining in the half.

Aiyuk would return the kickoff for Arizona State to the 23-yard line where ASU would start their drive.  They would drive down the field in just 1:07, capped off by a 23-yard TD reception by N’Keal Harry.  Harry would go under the hood, and then straight to the locker room after potentially having a concussion.

With the assistance of an Arizona State personal foul, Utah would find themselves in ASU territory with :47 remaining on the clock.  But the ASU defense would come up big with a sack on third down to force the punt.

Utah would have the ball to start the second half.  But ASU’s defense came out strong in the 3rd and intercepted Huntley to give the Sun Devils the ball on Utah’s 45-yard line.

But Utah would intercept Wilkins at the Utah 26 for the turnover.  And then Arizona State’s defense would force a punt by Utah, and it was a good one.  The 60-yard punt would put the ASU offense back, starting on their own 15 yard line.

Arizona State would be forced to punt after Eno Benjamin’s run on 3rd down came up short.  They would punt to the Utah 37 where the Utes would take over.

On the first play of the Utes drive, quarterback Tyler Huntley was injured.  Even with the injury to their starter, Utah would march down the field to the ASU 7, but the Sun Devils defense would sack Shelley to force a Field Goal attempt, which was good from 30 yards.  The score now was ASU 21, Utah 20.

TOUCHDOWN! N’Keal Harry with the 61-yard TD reception.  Nice answer for the Arizona State offense.  They extended their lead over Utah to 28-20.

Arizona State’s defense forced a 3 and out, making Utah punt the ball with just under 14:00 remaining.  ASU takes the ball over on their own 38 yard line.  The Sun Devils offense would then drive the ball down to their own 3 yard line, but settle for a field goal to take a two-score lead over Utah, 31-20 with 10:27 remaining in the game.

TOUCHDOWN ASU!  Eno Benjamin with the 44-yard run for the score!  This gives Arizona State the 38-20 lead over Utah with 4:12 to go in the game!  Another 15th ranked team about to go down!

INTERCEPTION!  ASU intercepts Shelley’s pass in the end zone with 3:11 remaining.  That’s how you cap off a great second half, and ball game!

Arizona State wins by the final score of 38-20 over 15th ranked Utah!  Their next game is at home next weekend against UCLA.

Side Note: Utah QB Huntley suffered a broken collarbone in the loss and he will be out for the remainder of the season.

Jeff Demers is a US Army Veteran, a New England native, and a die-hard New England sports fan! Although he has opinions on all sports, his main focuses are on Boston and Arizona sports teams and events, along with NASCAR and the PGA Tour. Outside of the sports world, JD is an avid entrepreneur who is striving to help people, especially veterans, realize their true dreams by achieving the lifestyles that they have earned. JD specializes in Network Marketing and Entrepreneurship.
All Posts »
PrevPreviousElfrid Payton Continues to Prove That He Is A Worthy Replacement of Rajon Rondo
NextCalifornia GOP Voter Suppression and the Wildfire ConnectionNext