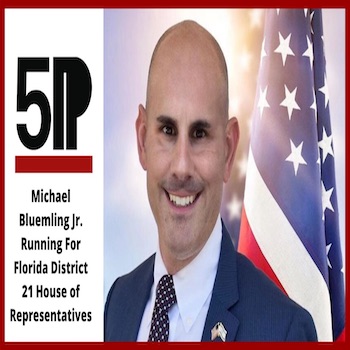 What are 3 Needs for the people in your district?

Where can people find you?

A vote for Bluemling get you what?

Michael Bluemling grew up in a home with an abusive, alcoholic father.  Michael overcame the violence of his past and has over 13 years of service to America and to Americans.  He served the Army with distinction, earning 12 medals and awards, and credits his life experience with shaping him into the Christian, father, leader and advocate he is today.

Don’t Floridians deserve a candidate that cares about their present and their future?

Michael Bluemling Jr. is a patriot, veteran, advocate, author and now, a candidate for Congress, Florida District 21. Having served our great country in the United States Army, as a Sergeant during the Kosovo campaign and America’s war on terrorism, Michael chose to serve those who fought for America when he became a civilian again. Discharged with honor, Michael worked for the Department of Labor and Department of Veteran Affairs, a fierce advocate for our veterans and their families, fighting for their present and future.

In 2013, Michael Founded Power of One, a veteran-owned coaching service to help veterans and people in transition, which was highlighted in U.S. Veterans Magazine in the November 2013 issue, as well as in DAV (Disabled American Veterans) Magazine in the issue of July/August of 2014. He closed Power of One in December 2016. He also worked for the state of Virginia, leading the Virginia Values Veterans Program, helping to create over 30,000 jobs for veterans inline with the governor’s initiative. Most recently, Michael was the Vice Chair of Mission United, in Fort Lauderdale, Florida.

What are 3 solutions for needs in the district?

What is your “Desired endstate” for district 21?

Where do people go to register to vote and find their voting precincts?

Where can people go to find you on the web?