Zack Godley is still trying to make his way back to starter status after having to earn his time in the bullpen. He got the start on Saturday night simply because the game was dubbed a “bullpen game.” Bullpen games are usually used to take the spot of a hurt starter in the rotation if […]

On Friday night, the Diamondbacks hosted the Mets for the first of a three-game series at Chase Field. Arizona has been struggling of late, coming home after losing 9 of their last 12 games, including being swept by Colorado in their last series of four games. Jon Duplantier made his Major League starting debut with […]

The San Francisco Giants came into Chase Field to take on the Diamondbacks after winning their last 2 of 3 games. But tonight, they ran into a bullpen that was looking to prove where they stand in the majors. The Diamondbacks would shut out the Giants tonight by the score of 7-0. The pitching staff […] 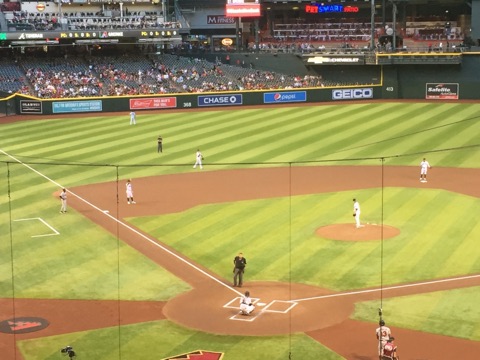 It wasn’t a pretty game by any means but the Atlanta Braves finally managed to defeat the Arizona Diamondbacks on Friday night by a final score of 2-1. In their previous four meetings, including three in Atlanta, the Braves had lost all four, and were also swept while hosting Arizona. So to say that tonight’s […]

PHOENIX, AZ- The Arizona Diamondbacks are still trying to find their identity on offense as they dropped their third straight on the young season. This includes tonight’s 2-1 loss to the San Diego Padres. Diamondbacks starter, Luke Weaver took his first loss of the season (0-1) even after pitching 6 and 1/3rd innings, striking out […]