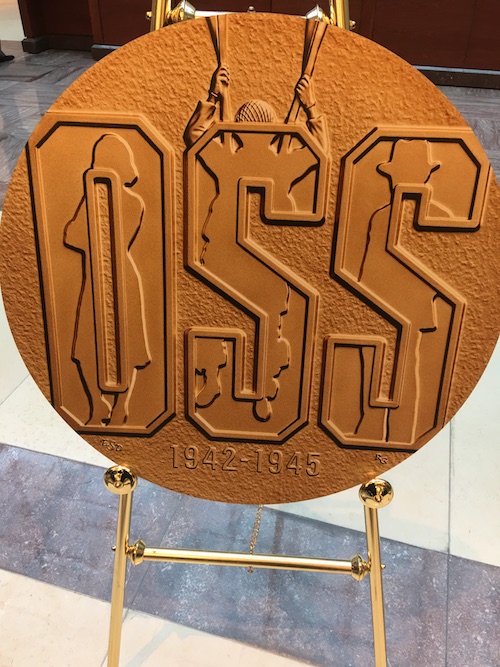 WASHINGTON — Americans who exemplified how to defeat the enemies of freedom were honored at a ceremony at the U.S. Capitol Building on Wednesday, March 21, 2018.  The Office of Strategic Services (OSS), which had 13,000 members during World War II was honored with the Congressional Gold Medal in front of five living members in the audience.

“It is the spirit of these veterans that endures,” Senate Majority Leader Mitch McConnell, Kentucky Republican, said. “Their pluck and patriotism proved that any American could rise to defeat the foes of freedom. How fortunate we are that these heroes answered the call.”

The Congressional Gold Medal is the highest civilian distinction awarded in the United States. A single gold medal has been struck to collectively honor the members of the OSS.

General William ‘Wild Bill’ Donovan created the OSS in 1942.  The OSS is considered the precursor to the Central Intelligence Agency.  In the organization’s heyday, it employed over 13,000 with almost 4000 women among the ranks.  A very secretive group, they were tasked with creating intelligence networks, supporting and training resistance groups through Europe and Asia and executing “mercy missions at the end of the war.  Besides the CIA, this group was largely influential in the creation of the Army’s Green Beret, Special Forces and Navy Seals. Additionally, four future CIA directors were member of the OSS.

“We are here to honor and recognize these brave veterans who Tom Brokaw proclaimed as members of the Greatest Generation, for their sacrifice, superior service, and major contributions during World War II,” said Congressman Bob Latta (R-Bowling Green), who sponsored the legislation to honor the OSS members. “As you all know, the Office of Strategic Services was America’s first effort to implement a system of strategic intelligence during World War II and provided the basis for the modern-day American intelligence and special operations communities. Under the leadership of OSS founder, General William J. (Wild Bill) Donovan, the OSS conducted acts of great bravery and accomplished feats of which many would have deemed impossible during the war, and their efforts were another factor to the Allied victory in World War II.”

One University of Tulsa alum stood out in the group of five living members of the OSS who were in attendance.  Calvin McKee was a member of the famed OSS after serving as a US Paratrooper in the Army.  However, this wasn’t the first time he was recognized for his service.  McKee had previously been honored by the French government for assisting in liberating France during World War II when the French government appointed him to the rank of Chevalier (Knight) in the Legion of Honor by the Republic of France; the highest civilian recognition given by the French government.