GLENDALE, AZ– Coming into ArenaBowl XXIX, both the Arizona Rattlers and the Philadelphia Soul were the hottest teams in the league.  The National Conference Champion Arizona Rattlers were winners of their last seven games, and the American Conference Champion Philadelphia Soul had won four in a row to reach the big game.  Both teams finished the season with identical 13-3 records, and both Dan Raudabaugh (Soul) and Nick Davila (Rattlers) had thrown more than 100 touchdowns on the season.  On top of that, both starting Running Backs (Richardson for the Soul, and Benson for the Rattlers) had 20 rushing touchdowns on the season.  If that wasn’t enough, let’s add the fact that each team beat each other once during the regular season.  So there was no clear-cut way to figure out who was going to win going into the championship game.  However, Vegas lines had the over/under around 125, and also had the Rattlers favored at home at -10 points.

And it was a true home game for the Rattlers….. kind of.  Instead of having the familiar confines of Talking Stick Resort Arena in downtown Phoenix to play in, a scheduling issue forced the event to be moved about 30 minutes West to Glendale, and Gila Rivers Arena, where the Arizona Coyotes hockey team plays.  But even with the move, it was definitely a hostile environment for the visiting Philadelphia Soul.

Arizona won the coin toss and elected to kick off to start the game.  It didn’t take long for the Soul to strike after a 4-play, 45-yard drive that lasted just 2:24 in the opening quarter, capped off by a 16-yard strike from Raudabaugh to Reynolds.  Giving Philadelphia the early 7-0 lead.  Arizona would attempt to answer the early score by driving down to the Soul 1-yard line, but then fumbling on a dive play.  The fumble was recovered by Dwayne Hollis and ran back for another early score for the Soul, extending the lead to 14-0 after another successful Frevert kick.  On the ensuing kickoff, the Rattlers failed to corral the kick off the net, fumbling once again, and the Soul recovered in the end zone (Tracy Belton) for another quick turnover and score.  The lead now, not even halfway through the 1st Quarter, was 21-0, and created a huge hole for the Rattlers to have to climb out of early.

The Rattlers would finally get their scoring going on a 16-yard pass from Nick Davila to Maurice Purify.  The drive took up just over two and a half minutes, and cut the Soul lead to just 14.  However, the Rattlers defense failed to hold the Soul before the end of the 1st Quarter, and Philadelphia would score again on a 22-yard pass from Raudabaugh to McDaniel.  Making the score now 28-7.

With the hometown crowd still cheering on their Rattlers, Arizona would go on a quick, sub-two minute drive, capped off by a 1-yard touchdown run by Benson.  The score at this time was now 28-14 with 13:54 remaining in the 2nd Quarter.  Philadelphia would answer with a 25-yard touchdown pass from Raudabaugh to Reynolds, again extending the Soul lead to 21 points with 11:14 remaining.  Arizona would then close out the 2nd half with a 1-yard touchdown run by Benson to bring the score at halftime to 35-21 with Philadelphia on top.

Going back to the coin toss at the beginning of the game, Arizona decided to kick off instead of receiving, hoping that they could double-up on scores at the end of the 1st half, and at the beginning of the 3rd Quarter.  They would do just that.  Rattlers Receiver Rod Winsor would be the recipient of a Davila 3-yard touchdown toss, bringing the Philadelphia lead to just one touchdown, 35-28.  But after an extremely long 7:02 drive, which took nine plays, the Soul would again find themselves in the end zone after a Raudabaugh 12-yard pass would find Shaun Kauleinamoku for the score.  Again extending the Soul lead to 14 points, 42-28.  After a failed onside-kick by the Soul, Davila would again find Windsor for the score after a two-play drive that only took 58 seconds. With the momentum seemingly shifting toward the Rattlers in the 2nd half, Philadelphia receiver Ryan McDaniel would fumble the ball just before crossing the goal-line after a 28-yard reception.  The Rattlers recovered, and had all the momentum going into the 4th Quarter.

Less than a minute into the 4th Quarter, Davila would find Purify for a 6-yard touchdown pass, tying up the game at 42-42 with 14:09 remaining.  But unfortunately for Arizona, their defense would give up a quick score, and the lead again, on an 11-yard strike from Raudabaugh to Shaun Kauleinamoku.  However, the extra point by Frevert was blocked, making the score 48-42.  With Arizona finally having the opportunity to take the lead on their next potential score and converted extra point, Soul Defensive Lineman Jake Metz would strip Davila from behind, and the Soul recovered the ball.  Raudabaugh would again find Kauleinamoku for a 30-yard score, giving the Soul a 56-42 lead after a successful 2-point conversion with just over three minutes to play in the game.  Just as it seemed the Rattlers were going to pull within a score in the final minute, Davila would throw an interception in the end zone, picked off by Soul Defensive Back, James Romain.  And that was the play that sealed the game for Philadelphia, winning the ArenaBowl by a final score of 56-42, over the favored Arizona Rattlers. 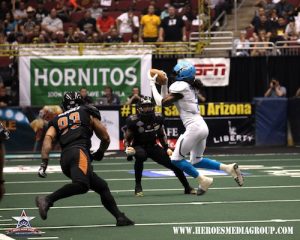 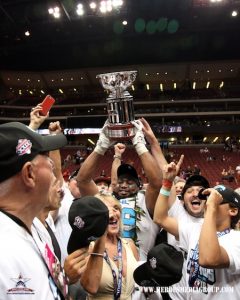 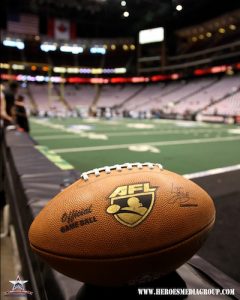 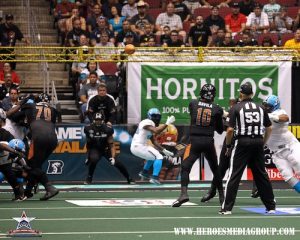 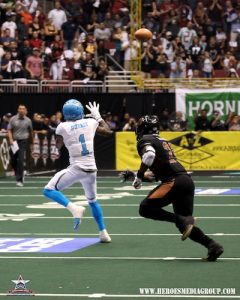 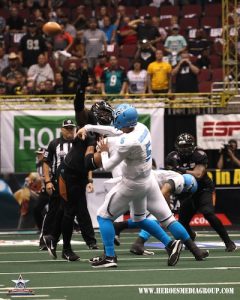 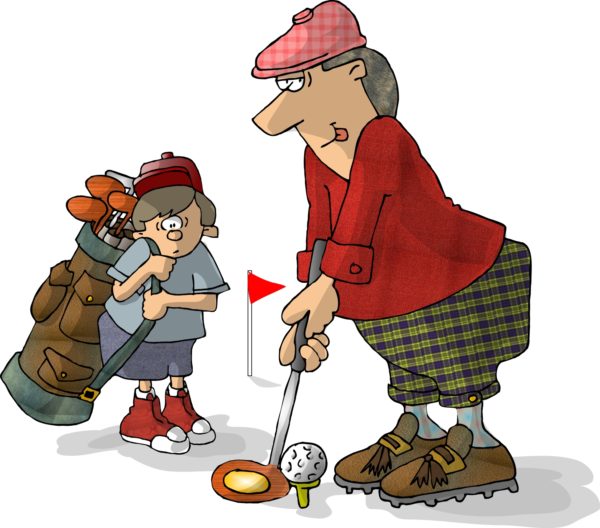 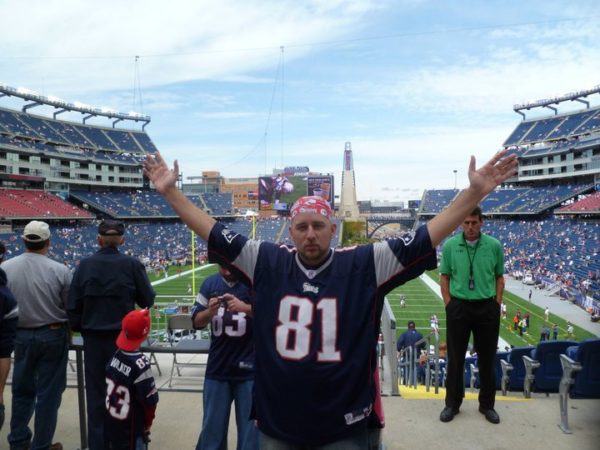