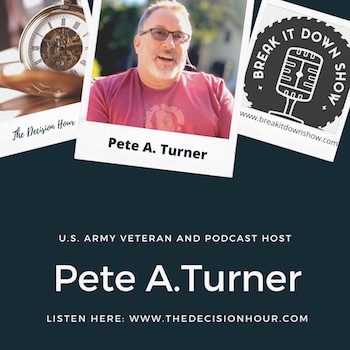 Heroes Media Group
Ep: 213 - Break It Down with Pete A. Turner

Pete is a former U.S. Army spy, with over 1,000 combat patrols.  We discuss what his time was like while in the military and what he experienced during transition.

Pete A. Turner is a fellow podcaster and professional podcast producer, and when you listen to his shows, it’s easy to see why he is one of the best in the business hands down! His show Break It Down Show, (a must listen too) pumps out episodes 5 days a week! We talk about his experience about podcasting and what he shares with new podcasters. He gives some GREAT tips for podcasters of all levels so take notes.

There is something NEW that Pete is working on, it is going to be a limited series, about 8 episodes long called ‘The Prison Chronicles’. Where Pete goes, and talks with a number of murders and others with significant crimes… Listen to what this series is going to be about, you will be surprised.