From start to finish the Kansas State University Wildcats dominated the tempo against the Creighton Bluejays during their 69-59 first-round of the 2018 NCAA Men’s Division I Basketball Tournament. Creighton trailed the entire game and struggled to find any rhythm against the Wildcats’ swarming perimeter defense. Barry Brown, Jr. led all scorers in the game with 18 points.

The biggest story of the night though was that Brown held Creighton senior guard Marcus Foster (20.3 PPG this season) to just five points on just 2-of-eleven shooting. Brown’s strong performance came on a night where Kansas State was without First-Team All-Big 12 selection, Dean Wade. The junior forward was a game time decision, and according to head coach Bruce Weber, will remain in that status when the team plays again on Sunday.

“We had our backs against the wall tonight knowing that Dean wouldn’t play. The guys really stepped up,” said Brown.

One of the players Brown was referring to was Mike McGuirl. With 17 points off the bench, McGuirl went 3-5 from behind the arc, including a three with no time left in the first half.

Brown said of McGuirl’s play, “Mike played his butt off today. (He) also had some great defensive contributions. He had a great game today.”

In the post-game press conference, Weber talked about persistence being the key to victory.

“The word I put on the board today was persistence,” said Weber. “There is nothing more important in this world than persistence. It can overcome talent; it can overcome skill. I’m just proud of them because they’ve been persistent all year.”

Next up for the Wildcats is the University of Maryland Baltimore County Retrievers, as the two teams will face off on Sunday in Charlotte following the Retrievers shocking first-round upset over the overall top seed in the tournament. 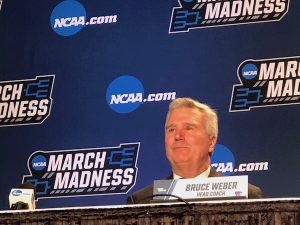 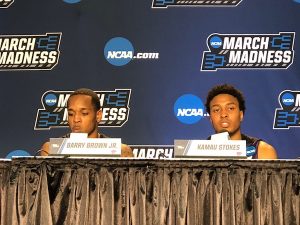 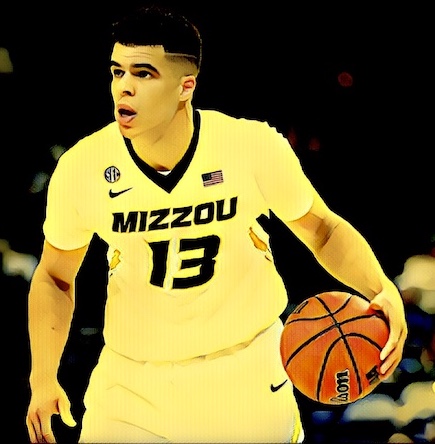