Eight-Oh with thirty seven minutes to go is how Michigan State began the evening against the Louisiana State University Tigers.  The Spartans never seemed phased in route a 80 – 63 victory in the nation’s capital.

“It’s a very good LSU team; scary the way they can shoot the ball,” said Tom Izzo, Michigan State’s head coach. “But really proud of this team taking the scouting report and adhering to it and figuring out what a team’s strengths are; I thought we attacked them very well.”

With the exception of a strong start to the second half, Michigan State seemed to control this game.  Dominating on the boards with 41 rebounds to the Tigers 34, the Spartans were able to peak when the Tigers tried to get the momentum going.

“That was our focus coming into the game, just cut outs, rebounds,” said Cassius Winston, who Coach Izzo refers to as his Tom Brady.  “Those ‘bigs’ did a great job.  They were battling the whole night; they put bodies on people all night.”

Winston lead his Spartan team with minutes played remaining on the floor for 39 minutes and four seconds and chipped in 17 points.

Michigan State enjoyed a 10 percentage field goal advantage over the Tigers, 46.9% to 36.1% and threw in 40% of their three pointers.

“They really did a good job establishing the pain and especially on the glass,” said Coach Tony Benford, LSU’s interim head coach. “they did a great job in the first half and throughout the game getting on the glass.

Michigan State University has advanced to their 10thElite Eight under Coach Izzo.

“We’re all real excited,” said Spartan Forward, Kenny Goins.  That is what we’ve planned for, tried to set a goal for in the beginning of the season. We keep saying, ‘Win the weekend.’”

Michigan State University will have to win the weekend against either Virginia Tech or Duke pending the results of the second game in Washington, DC. 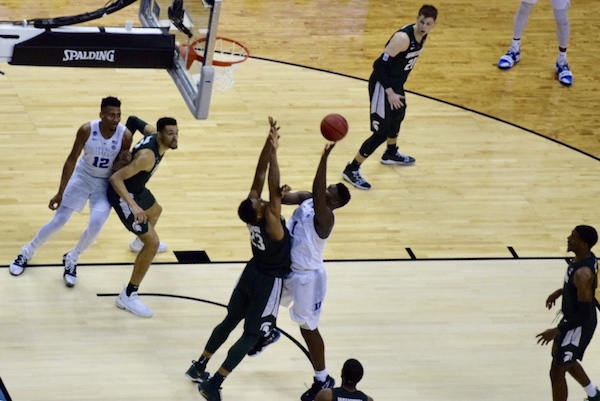