Beginning the game on a 21-2 run, the Butler Bulldogs seemed to be poised to perform yet another upset in the first round of the NCAA Tournament.  However, the madness was just getting started.  Despite the hot start from Butler, Arkansas wasn’t going to back down.  The Razorbacks responded with a 27-6 run of their own to take a 2-point lead with 3:48 remaining in the first half.

With the score 27-13 in favor of Butler, Arkansas freshman Daniel Gafford blocked what looked to be an easy layup for Butler’s Tyler Wideman.  The terrific effort play from the 6’11 forward catapulted a 16-0 run for Arkansas.

Not to be rattled, a composed Bulldogs team closed out the half on a 9-2 run, which included 3 of the team’s 10 offensive rebounds in the first half.

Both teams battled back and forth coming out of the locker room until the 8:59 mark when Arkansas’ 2 on 1 fast break was brilliantly defended by Aaron Thompson.  The great defensive stop immediately led to a 3-point make by Kelan Martin, to put the Bulldogs up 56-49.  Martin said about the play, “It was a great play that Aaron made for us and he found me again, so I kept shooting.”

With a 10-point lead, Butler freshman, Aaron Thompson rolled his left ankle and remained down for a couple minutes.  He would stay in the game and continue to lead the Butler offense.

The tandem of Baldwin and Martin would ignite Butler to its first round win as the duo would score 61 of the team’s 79 points.  Baldwin would credit his success afterwards by saying, “it was a team effort.”

Butler coach, Lavall Jordan will get back to work to prepare for a matchup with #2 seed Purdue on Sunday.  The Boilermakers will be without senior center, Isaac Hass, for the remainder of the tournament with a fractured elbow sustained in their game vs. Cal St. Fullerton. 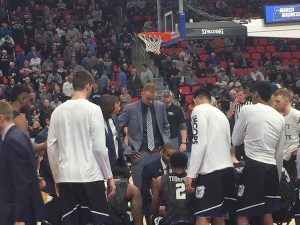 The tale of two teams Defense Vs. Offense 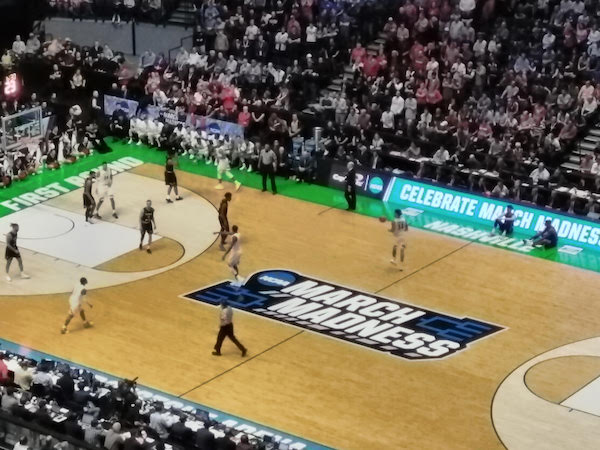