How can you not be excited about a game that features one team coming off of a four-game winning streak while the other has won seven straight games in a row. The Cincinnati Bearcats have won both the regular season and tournament of the American Athletic Conference, a team known or the tenacity on defense along with four players averaging 10 points and a bench to support. Today we will find out if that is enough to stop the Sun Belt tournament champs, as the Panthers come off four straight wins behind their 21-point scorer D’Marcus Simonds who can score at will.

The Bearcats came out with their starters Evans, Jenifer, Clark, Washington, and Cumberland while the Panthers came with their top five in Benlevi, Simonds, Session, Mitchell and Thomas. Right out of the gate Simonds picked right off where he left scoring at will with two quick three pointers and a quick ten points. The Bearcats didn’t seem to expect the Panthers to come out so fast, prepared and ready. Quickly the game seemed to get away from Cincinnati with Simonds getting hot early and ballooning out to sixteen points in the first twelve minutes. Watching the Bearcats practice yesterday I saw a very lethargic team missing the energy that led to their 30-4 record, I wondered if they may not have been taking the 24-10 Panthers seriously, it was apparent early they should have. However, by the seven minute mark the Bearcats, Evans, Clark and Cumberland settled the team and combined for sixteen points to bring the Bearcats back to within one. Their fan-base also came alive here in Nashville no doubt sparking that fire inside that got them here. Devon Mitchell came off the bench for Georgia State to hit a three to silence the crowd, not to be out done Jarron Cumberland answered with a three of his own followed by a tough drive to the goal and a great finish at the rim to give the Bearcats their first lead 28-25. Jenifer, and Washington hit a three each to slightly pull away before the half, however Simonds calmed his team, drove the lane scored and brought the Panthers within five and only two seconds before halftime. After a hell of an inbound pass to Washington the shot wasn’t there and we go to the half with Cincinnati lead by Cumberland and his sixteen points at 35 and Georgia State lead by Simonds and his impressive 18 first half points at 30.

Second Half Action Is underway, both teams came out flat missing until Panthers Thomas hit for two bringing them within three. That’s all it took for Cumberland from Cincinnati to come back to life. He would go for two back to back goals and a three to spread the Bearcats lead to 10. The Panthers brought in Isaiah Williams who hit two threes followed by a Jeff Thomas three to put them within one to tie at the eleven-minute mark. After a quick bucket by Washington followed by a Gary Clark three the Bearcats got back out by two. It’s clear these Georgia State Panthers are not going away easily and definitely are trying to hang around to advance for the chance to stay in the dance!  After a quick run by the Bearcats lead by their top three scorers Clark, Washington and Cumberland they got out to a ten-point lead with four minutes left to play. The Bearcats have had to fight for every point relying on their star’s talent to finally pull away. After the one minute mark Cincinnati seemed to have imposed their will with a talented showing from Evans, Clark, Washington and Cumberland, when they play and share the ball they are hard to beat. Today Georgia State came out with a lot of heart but it just wasn’t enough against the talented Cincinnati Bearcats team who won 68-53 and will advance to play the winner of the Texas/Nevada game later today. 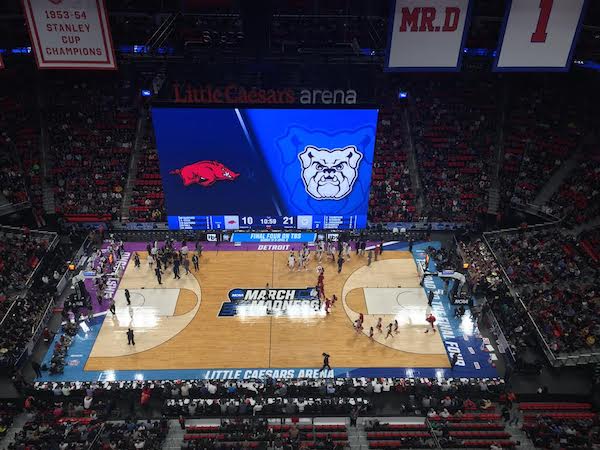