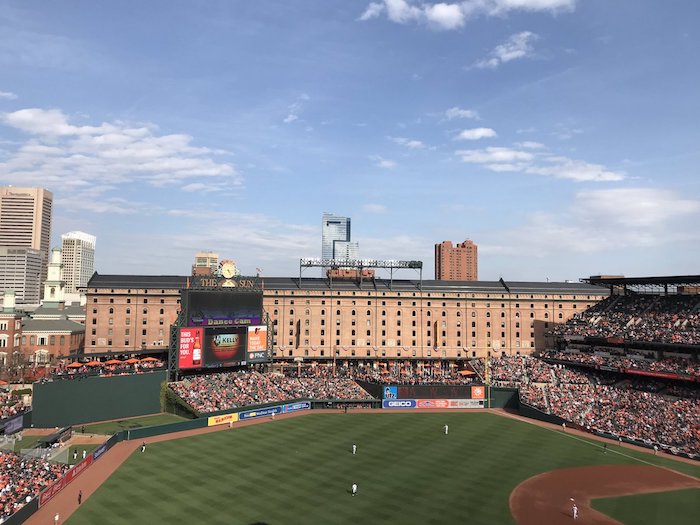 After beating up the Yankees in New York last week, the Orioles hosted the Bronx Bombers on Thursday, April 4, 2019 for their season opener.  A great day in Baltimore before a sellout crowd of 44,182 with Oriole “greats” Cal Ripken, Jr. Eddie Murray, Brooks Robinson and Boog Powell on hand started well as the Orioles took a 4-1 lead into the fifth inning. However, the Yankees power machine caught the Orioles sending “the birds” to an 8-4 loss.

manager Brandon Hyde said. “It was one of those games where the long ball beat us.”

Hyde is referring to the Yankee’s proficiency for hitting home runs. Gleyber Torres had two dingers with Yankee catcher, Gary Sanchez and Yankee DH Luke Voit, each adding one more home run.  Torres offensive effort included four hits with three being for extra bases and added four RBIs. The last Yankee to accomplish that was Joe DiMaggio in 1936.

“There’s no better feeling than that,” Torres said. “I feel really [good] when I do my job and help my team.”

The Orioles enjoyed a super pitching performance from starter, Alex Cobb who kept the Yankees to one run through five and 2/3 innings.  However, Mike Wright relieved him in the sixth after a Sanchez home run and the “pinstripers” broke through hitting two more home runs and racking up 7 more runs toward their 4-run victory.

The sub-stories coming from this game include the Yankees injury list growing each day.  In Baltimore, the Yankees started two players who initially did not make the team out of spring training;  Clint Frazier in left field and Tyler Wade at second base.  Both players had one hit in four trips to the plate.

Additionally, the Orioles $161-million-dollar first baseman continues to start and play in spite of the fact that he is hitless this year.  Yesterday, Chris Davis was the target of incessant booing. The only cheer for his spot in the lineup was when Hyde pinch hit for Davis in the eighth inning.  Hanser Alberto replaced Davis and promptly singled to the approval the remaining sellout crowd.

“I don’t think anybody’s feeling sorry for me right now,” said Davis. “I think people are ready to see me turn it around, and I’m ready to turn it around.”

Davis finished the 2018 campaign hitless in his last 21 at-bats and has had zero production in his first 17 at-bats of 2019.